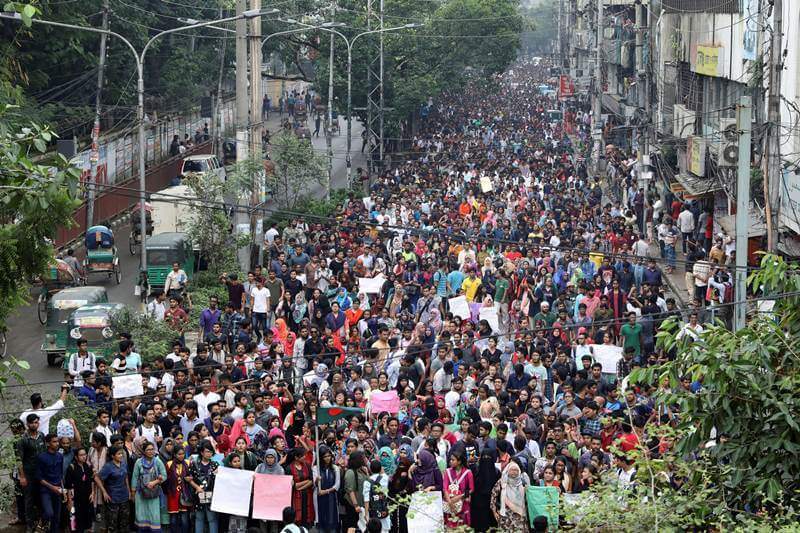 What’s Happening in Bangladesh? Road Safety is the major issue faced by many, in spite of great progress in international traffic safety works. There are still many traffic accidents and injuries which takes place even in the developing countries like Bangladesh. We are aware of Bangladesh Student Protest for Road Safety. Now we are also aware that the unprecedented protests by the students in Bangladesh demanding better Roads and demanding for better road safety laws have come to an end.

Students returned to their classes after 9 days long Protest, almost 150 people are injured by facing police riots. No one can deny that Bangladesh Student Protest for Road Safety is not valid and which should be resolved as soon as possible but what incident has given rise to such Serious protest? what made Bangladesh student protest on street? what brought Bangladesh students on the street to protest to such level? This Road Safety Protest not only shaken Dhaka the capital city of Bangladesh but also Whole Bangladesh.

The tragic accident of two college students on 29th July 2018 triggered mass protest by Bangladesh students who have taken to the streets of Bangladesh’s capital Dhaka to demand the authority to Improve Road safety. In Bangladesh, Road safety is being the major issue. Almost 3000 people died in road accidents each year as per the data compiled by the World Health Organisation.

Road Safety Protest took place on 29th July a privately owned bus ran over the group of students which killed two students a boy and a girl and left others in injuries. The reason why the bus driver was over speeding because he wanted to overtake other buses and wanted to pick more passengers so that can earn more. Competition and overtake has taken lives of two and triggered the outrageous protest for road safety.

This incident triggered anger amongst Bangladeshi youth and they all decided to protest against it and to bring some changes in Road safety laws. Earlier Protest was Disorganized, students youth were protesting just for safety purpose and just for road safety laws and for stronger reforms, but some statements and some rough speeches of some ruling parties and politicians have given rise to the Road Safety protest. Those rough and useless speeches and comments acted as a fire to the protest and Protest go to another level. Normal Road Safety Protest turned to Violent Protest.

This Bangladesh Student Protest for Road Safety didn’t only remain till Dhaka but it spread in whole Bangladesh. It turned Violent when Pro-government Youth Activist attach Students with clubs, while police fired Tear gas to break up the Demonstration, Journalist, Freelance Journalist was beaten because they were shooting the protest. Bangladeshi Police also arrested A Prominent Human Rights Activist and Photographer Shahidul Alam in connection with the Protest. later The Committee of Protect Journalist Asked for Immediate Release of Alam and also asked that the journalist and photographers who are covering the protest should be allowed to do their work without any fear of attack or arrest.

#BangladeshStudentProtest Related to Road safety Movement brought not only Dhaka but entire Bangladesh to a standstill. They criticized Government, they blocked roads, they allowed vehicles to move only if they have a proper license or if they are into some kind of emergency, and students also said that Bangladesh Chhatra league is also kidnapping girls and rapping them, but however, BCL Refused all the allegation. They completely denied such allegations.

After such Bangladesh Student Protest for Road Safety, Bangladesh Prime Minister went to see the Victim’s  (students) who were killed by the bus driver on 29th July. Bangladesh Prime Minister said that Drivers are arrested and urged protestors to go home and warned them that third party can sabotage their demonstration, and requested all family’s and parents to not allow their children to move out, But students agreed to move back to classes and to their irrespective universities only when their demand will get fulfilled. Hence on Monday in an attempt to address the concern raised by students, Bangladesh Cabinet approved new safety Regulation, which includes death penalties too. Law Minister in an interview with CNN Also said that The new Bangladesh Road safety law also has 5 years of Imprisonment and a monetary fine for reckless driving.

This wasn’t the first time Bangladesh youth or students has moved out for a protest to bring some serious changes in laws, earlier it was Reservation and now it is Road safety law and in both protests, students have brought some major changes in laws.

This protest was done by students in order to fulfill certain demands and that demands were to give capital punishment to the drivers who over-speed or overtake other vehicles just for the sake of money or who don’t value human lives. Another purpose for the Protest for Road Safety, Bangladesh or Dhaka’s Road infrastructure is really very weak, and they wanted to handle Road Traffic properly and another demand was Law Enforcement. bangladesh Student wanted every individual to follow road safety laws seriously because Road safety is must for everyone.

Doing Protest for some serious issues which need to get resolved is not wrong. There’s nothing wrong to bring up your demands, but getting influenced by others negative statements will only ruin your good cause protest. People who pass negative comments and statements they don’t want peaceful protest they want negativity, they do it for their wrong purpose, they want to see riots and violence, hence it is our responsibility to fight for wrong but in a right way.

Never allow negative influencers to influence your right motive. Always be a decision maker, never allow someone else’s negative statements or words to influence your positive and right decision. Don’t make others negativity to dictate your positive and true emotions. Never allow others to divide you, always fight for the same right purpose. The thing we should learn from Bangladesh protest for road safety is that they all together protest for the same purpose. They don’t become the victim of divide and rule, they know the power of unity hence they are able to bring some real changes in the law. The more divided you are the fewer results you’ll bring in real. Hence always stand together for the right cause and never get influenced by negativity, never allow negativity to dictate your positive cause.

Here I am not saying that protest is not right, actually protest is right and it is also a democratic right but protest should be done by considering two factors first, a protest should not harm others and should always remember law and orders before protesting and another thing which student should consider is their own future, because their future also matters.

This Road Safety Protest wasn’t the only reason for everything. Actually, this Protest was only the triggering point, people were suffering due to road problems from a very long, as per government reports, road accidents and injuries has increased 25% since 2016 till now and the biggest reason for the protest was government who failed to control road accidents and injuries over past years and another big reason for the protest was Dhaka city average speed from 2005 till now (2018) Dhaka speed has decreased drastically it was 25 km per hour earlier and now it is only 7 km per hour.

All this is happening because From the last 10 to 15 years all major development taken place in Bangladesh was in Dhaka and Chittagong, and thus people from other areas started migrating to Dhaka and Chittagong, because of which Dhaka and Chittagong population is increasing and which is overloading Dhaka and Chittagong infrastructure hence the best thing possible is to do develop other parts too and to imply strict law enforcement no matter what status man will have, everyone, should be given the same punishment for reckless driving and should handle and solve traffic issue.

And Government should work properly before any protest takes place.

Read More: Why People Get Angry

This is Happening in Bangladesh. Do share your views about Bangladesh Student Protest for Road Safety and what all things can be done to resolve such issues and how individuals and government should work to make our world or our country a better place to live, kindly share your views.

Hello, beautiful soul. There’s a ton of false information about karma, and get this. If you don’t understand what karma is and how to work with it, you can stay stuck, repeatedly struggling with the same issues and experiences. So, what is karma, and how does it affect your life? I’ll be answering these questions…